One thing I cannot resist are old books. I can’t afford the money and shelf space for old books just for the sake of them being old, as much as I would love an entire library full, but books that paint a picture of the world at their time of origin are something I seem to be unable to pass up.

The Guinness Book of World Records has become a common sight every Christmas; filling every bookstore, supermarket gift display and any shop where they can think of an excuse to stock it. It’s never something that’s interested me terribly. But while browsing a beautiful little antique shop the other day I came across a 1963 edition, printed while it was still a relatively new phenomenon, and I just had to buy it. 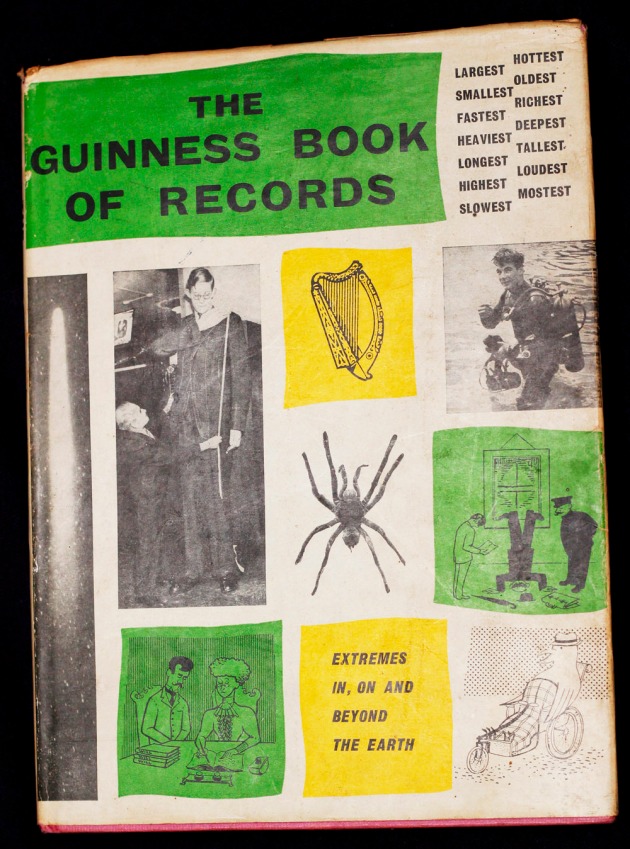 Instead of the holographic cover, flashy pictures and yelling titles, it’s quite British and restrained, while obviously finding great joy and pride in compiling weird facts. Is it strange that I find it much more exciting to read about what or who was the tallest, loudest and heaviest in 1963 than today?

Some of my favourite tidbits:

(This one for sheer weirdness. I wonder who holds the title now!)

The worst case of compulsive swallowing was reported by the American Medical Journal in December 1960. The patient, who complained of only swollen ankles, was found to have in his stomach, a 3-lb. piece of metal, 26 keys, 3 sets of rosary beads, 16 religious medals, a bracelet, a necklace, 3 pairs of tweezers, 4 nailclippers, 39 nail files, 3 metal chains and 88 assorted coins.

(This one because hiccup attacks make me panic, just in case I end up like poor Mr O’Leary. And I love the usage of the word “hicked”.)

The longest recorded attack of hiccups was that afflicting Jack O’Leary, of Los Angeles, California. It was estimated that he had “hicked” more than 160,000,000 in an attack, which had lasted from 13th June, 1948, to 1st June, 1956. His weight declined from 9 stone 12 lb. to 5 stone 4 lb. People sent 60,000 suggestions for cures of which only one apparently worked — a prayer to St. Jude, the patron saint of lost causes.

(And this one because it makes me laugh in horror. Does that make sense? Just me? Oh..)

The world’s fastest psychiatrist was Dr Albert L. Weiner of Erlton, New Jersey, who dealt with up to 50 patients a day in four treatment rooms. He relied heavily on narcoanalysis, muscle relaxants and electro shock treatments. In December 1961 he was found guilty on 12 counts of manslaughter from using unsterilised needles.

And then there’s the inside jacket cover lined with delightful newspaper quotes, such as:

“One of the most superlatively dotty and entertaining compilations to be published for years.” – Observer

“Will be devoured by recipients of all ages. Will be in high demand for Christmas Presents.” – Smith’s Trade News (I wonder if the person who said this got to see how prophetic it turned out to be)

I’m looking forward to pages and pages of browsing, and for the first time I’m tempted to buy a current Guinness Book of World Records this Christmas so I can see how things have changed between 1963 and 2011.

Do you have anything from the olden, or even not so olden days that offers a glimpse into life at the time? I’d love to hear about it!

One thought on “Biggest, Slowest, Fastest, Mostest… as declared in 1963”

All about photography and life and happy things.